Our focus is particularly on the lower decile schools of Hawkes Bay where such opportunities as this for talented students are not as readily available.

Our goal is to not only develop the students natural musical talent- but in particular their confidence in themselves and in their abilities.

Workshops and performances are often  a ‘first-time’ experience for many of the students, and their sense of pride and the high standard of their achievement is alway greatly appreciated by their peers and whanau.

Diary of our journey through the Motu 2021

Due to the global pandemic situation, our planned trip to San Francisco was cancelled- so` instead we decided to expose our five student violinists; Kyah, Dahlene, Stella, Ezias and Murdoch, to a world of music that they would not normally experience – on a road trip to Bluff.

With the five ākonga, along with Raewyn, Sonya, Greg, Pam and Tony we set out for Te Whanganui-a-Tara  Wellington, where we were joined by Helen Grant, a long time benefactor and supporter of Orchestrate. Helen is 90 years young and she thoroughly enjoyed the time spent with our tamariki. We were all very sorry to say ‘Ka kite ano’ to her on the day we crossed the Cook Straight. Such were the friendship and admiration she held for our tamariki that she met them at the Napier airport on their return.

There was a moment of excitement one night when the fire alarm went off. We all congregated outside with the other occupants of the YHA and Ezias was very surprised when his uncle jumped down from the first fire engine to arrive. There was of course no fire…

Before leaving Te Whanganui-a-Tara we spent a relaxing afternoon at Greg and Anita’s (Greg’s partner) home playing music together and enjoyed a fine meal.

The ferry to Picton was largely uneventful – a smooth crossing. We drove from Picton to Ōtautahi Christchurch with the snow-capped southern alps on one side and the Pacific ocean on the other, stopping briefly at Kaikoura for lunch and photos.

We settled into our YHA accommodation in Ōtautahi. This leg of the journey was long, having caught the ferry early, so to reward the tamariki, we went 10 pin bowling after dinner.

Ōtautahi allowed us to catch our breath, repack our clothes, catch up with our journal writing, and prepare for the next phase of our journey.

The trip to Ōtepoti Dunedin was broken up with a visit to the Steampunk museum in Oamaru. It was an amazing place! We had lunch in a nearby park and feasted on local elephant fish and chips before setting off for Ōtepoti.

Our accommodation in Waihōpai Invercargill was in a hotel and we all enjoyed the luxury after travelling so far. All our accommodation throughout our travels was excellent but this hotel had an indoor swimming pool which the tamariki loved!.

Monday was the return home for our tamariki. The children had maintained regular contact with whanau throughout the trip  and had been away 11 days in total.

In many respects, the trip was a huge success. Ngā tamariki enjoyed some wonderful musical experiences that were new to them and there were cultural aspects of the trip that provided them with some thoughtful moments.

Roles were established early. Sonya’s culinary skills ensured that we enjoyed memorable meals throughout the trip. Delicious breakfasts, lunches and dinners were provided with so little fuss that one had to think carefully about the amount of planning and organisation that was needed to allow us to enjoy such meals. Tonys role was to take care of the van and ensure drop-offs, pick-ups and parking were attended to and along with Pam, were able to supervise ngā tamariki without being too intrusive. Raewyn looked after the instruments and she and Greg organised violin lessons at various places along the way, as well as arranging places for the children to perform for others. The children were enlisted in the kitchen when required. Some seemed more familiar with a kitchen sink than others, however they pitched in to clean dishes, make lunches and on one occasion made the entire evening meal.

Throughout the whole trip, we were really proud of the way in which our tamariki conducted themselves. There was a true sense of whanaungatanga amongst the group and it was their sense of enjoyment that allowed the adults to relax and also enjoy themselves.

We have presented workshops at Irongate School in Flaxmere for many years – and due to an invite to attend a Music Camp in California June 2021, we increased our activities last year to include weekly vocal and string classes in preparation. Despite NUMEROUS interruptions caused by the Covid 19 lockdowns etc, the students progressed at a phenomenal rate!

They performed multiple times to school assemblies and participated in several workshops and performances with Mr. Gregory Squire and his colleagues from the NZSO.

Three of our vocal students were selected to join Project Prima Volta Junior (PPV) – and one of these students also featured as a soloist in PPVs public performances of Benjamin Britten’s St Nickolas.

Our plans to travel to the USA to attend a Music Camp in California have been postponed until 2022 due to the ongoing global pandemic situation- however we are planning instead to tour Wellington and throughout the South Island in the July school holidays, culminating in a final performance in  Invercargill.

The students will also be performing with a live professional Orchestra in May and September. The programme will include ‘Peter and the Wolf’ with students compering the Narrative.

Additional  students from the school will also be selected to train under professional photographer Shayne Jeffares to form a Media Team – recording progress of the young musicians throughout their journey from ‘Day 1’ to ‘Invercargill’.

October 2020 – workshops with Gregory Squire and colleagues from NZSO

As part of the workshop, the students played a number of games and musical exercises with the Quartet where they were presented with a wide spectrum of music (eg Mozart, Beethoven, Ravel, Shostakovich, and NZ contemporary composers). The students were asked to express how it made them feel- excited, sad, loving, scared.  They were also asked to conduct and compose- utilizing their listening abilities to exclude and include parts as they quartet played.

The students totally wowed the QUARTET with their participation, comprehension and intuitive abilities. We are not sure who enjoyed themselves the most…the Quartet or the students! 🙂

The day finished with a performance to the whole school. Again the students were exposed to a wide range of musical styles- classical and contemporary. The students behaviour and concentration were exemplary.

Edwin Huizinga, the fiddle player and William Coulter, guitarist, were touring NZ in March 2017 and spent 2 days in Hawkes Bay working and performing with our students.

Edwin is an exciting violinist based in Toronto and an active player in the early music scene as well as in the traditional music world, and has earned degrees from Oberlin and the San Francisco Conservatory of Music.

William is a Grammy Award winning guitarist with a Master’s degree in Classical guitar from the San Francisco Conservatory of music.  Their programme was about blending Baroque dance music and traditional Irish dance music and also exploring their own arrangements of Vivaldi, traditional Bulgarian music, Celtic music, and the music of Piazzolla.

The students were mesmorized by the glorious sounds!

The Irongate students then treated the visitors with 2 powerful and emotional hakas (one being their school haka, and the 2nd being from their Iwi). Our guests were overwhelmed with emotion. It was truly a very special time for all involved.

They were so impressed they organized another tour to the South Pacific in  August 2019  to specifically visit Irongate School again.

This time we enjoyed their company in the school for 2 days, culminating in a succesful recording project and performances to  their peers and whanau.

The workshop involved as many from the school as possible.  Alongside the performing students, a group was also involved in preparing a video /audio recording of the 2 days – a collage of the workshop, their music, haka and school culture.

Edwin and William were so impressed again with the abilities and commitment of the students, that the school has been invited to send a group to perform at the Big Sur Music Camp, in California June 2021. This is a very exciting opportunity for the students! 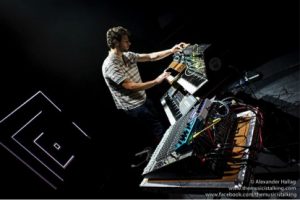 The students were particularly entrigued with Ed’s skill on his original 70s Minimoog synthesizer as he took them on a dynamic journey from energetic synth beats to lush ambient soundscapes, to thick funky grooves, and the boogie woogie! 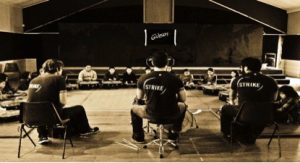 30 Irongate students (primary to intermediate age) worked with members of STRIKE, With a relatively short time to prepare a series of intricate pieces to perform to the public, the students didn’t falter.

With a room full of drums and other equipment to “hit”, one would have not been surprised to hear a cacophony of noise- BUT immediately the more senior of the students showed their leadership skills and set the standard in behaviour, encouraging and controlling the younger ones.

Their concentration and commitment was remarkable, and the students hardly paused for tea breaks!

Again, for many of the young performers this was a ‘first time’ experience to perform in front of their peers and the public- and they did it with great confidence.

The students at Irongate School, Flaxmere never cease to amaze us with their enthusiasm and talent.They are a testimony of the dedication of their teachers and whanau support workers.